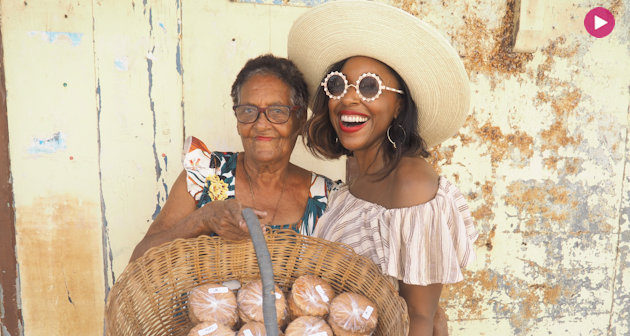 A hidden gem in the French Caribbean, the French overseas territory in the Lesser Antilles is a set of islands sandwiched between Antigua and Dominica. Each of the five-island that makes up Guadeloupe is unique in its culture, traditions and landscapes. The two largest islands, Grande-Terre and Basse-Terre, are close enough to be connected by a short bridge and together their outlines form the wings of a butterfly.

Christopher Columbus touched down on Guadeloupe in 1493, marking the beginning of a long, complicated history of colonial rule. It came under French rule in the 1600s, when colonists brought slaves to establish sugar plantations. A mix of French and African history runs deep throughout the Guadeloupe Islands and the Afro-Caribbean culture influences the food, architecture, music, clothing and more!

The warm, sunny islands that make up this French territory in the Caribbean are just a short plane ride away. European low-cost carrier, Norwegian Air offers cheap nonstop seasonal flights from New York and Florida to the French Caribbean islands of Guadeloupe from $79 one-way. While booking a ticket on the ultra-low cost carrier can come with some additional fees for selecting your seat, checking a bag, and choosing a meal, the short three to four-hour flight makes getting there easy.

A stay at Tendacayou Ecolodges & Spa is a chance to go back to basics and enjoy nature in the heart of the untouched and protected wilderness of Morne Bois d’Inde. There is no television, no telephone and wifi is offered in common areas only. Disconnect completely, away from life’s pollution and stress to enjoy the singing of the birds and the breeze rustling through the trees at this peaceful hideaway.

Built in the 17th century, the Fort Delgrès was initially made to defend the harbor of Basse-Terre against the English attacks. It was renamed in 1989 as a tribute to Louis Delgrès, one of the Guadeloupe Islands’ major figures for the abolition of slavery. France became the first to abolish slavery in 1794, and was also the only country to re-establish it in 1802. Louis Delgrès, a free man of color born in Guadeloupe, led a rebellion to prevent the return of slavery in the French Caribbean and resisted the much larger French Army for 18 days in the ‘War of Guadeloupe’.  When it became clear that they would be defeated, Delgrès ordered a suicide explosion of his men and him coining the term, “Live free or die”.

Step back in time and visit the Memorial ACTe Museum, part of UNESCO’s Slave Route Project, a global initiative to promote the rapprochement of people through the shared legacy of slavery. A museum and architectural masterpiece, the modern exhibit space showcases a breathtaking journey into the history of slavery right through modern day. Visitors will take a guided journey back in time, to navigate the major chapters of the African diaspora in the Caribbean and the Americas from the early-17th century to the present day, drifting through the triangular trade, the Code Noir, the abolitions and segregation.

The center for the expression and memory of the slave trade and slavery is a must-see for a discovery of historical and cultural aspects of Guadeloupe. The first museum of its kind in the world, between 2 and 4 hours are needed to view the artifacts, works, texts and other visual documents that make up this permanent exhibition.

La Pointe des Châteaux is a peninsula that extends into the Atlantic Ocean from the Eastern coast of the island of Grande-Terre, in Guadeloupe. Enjoy a hike up La Pointe des Chateaux in Saint François where a cross remains in the memory of shipwrecked mariners.

With its natural assets, safe environment and modern French infrastructures, Guadeloupe is the perfect Caribbean Getaway for outdoor activities. With over 110 miles of hiking trails spread all over the archipelago, the Guadeloupe Islands can easily be explored by foot. One of the most scenic hikes is La Soufriere, a gently active volcano, reaching 4800 ft. Start your climb at the famous naturally therapeutic Yellow Bathshot sulfur springs, and make your way through the rainforest by taking the trail all they way to the top. It was also designated a World Biosphere Reserve by UNESCO in 1992.

Rich in culinary heritage that has grown from its European, African, Indian, Caribbean and oriental cultural influences, the secret to creole cooking lies in the use of spices and seasoning. Sea-to-table and farm-to-table dishes are the norm in the Guadeloupe Islands. With more than 250 restaurants across the archipelago, visitors will enjoy local delicacies including Bokit, Sorbet Coco and Tourment d’Amour.

Rum in Guadeloupe is coveted for its pure and unique flavor, as a result of its unique distillation process using fresh sugar cane juice as opposed to molasses. While visiting, try the famous ti’ punch rum cocktail or order the planteur, a rum punch made with fruit juices. Cocktail lovers should checkout the Cocktail Week in Guedelopue for a Master Class with international bartenders to learn techniques of perfection, tips, recipes and more!

Visit of Pointe-à-Pitre, The New Orleans of the Caribbean

You will find your favorite French brands in the shopping malls from Mango to Lacoste. If you’re looking for local designs, Nathalie Julan, a Guadeloupean Designer known for her fashion and accessories, recently unveiled her new collection along other designers at a fashion show at the Memorial ACTe Museum in Guadeloupe.

Guadeloupe Islands are connected by efficient inter-island ferry service, the farthest being a mere 45 minutes away, making Guadeloupe an ideal island-hopping destination. Les Saintes, a small archipelago of the French Antilles in Guadeloupe is connected by ferry service and is perfect for a day trip. Reminiscent of an older Saint Barth, here you will find Les Saintes Bay, listed as one of the most beautiful bays in the world, along with picturesque, colorful streets, the multicolored boats dotting its shoreline. While you’re there, try the Tourments d’Amour, a tartlet that’s soft on the outside and crunchy on the inside with coconut, banana or guava filling.