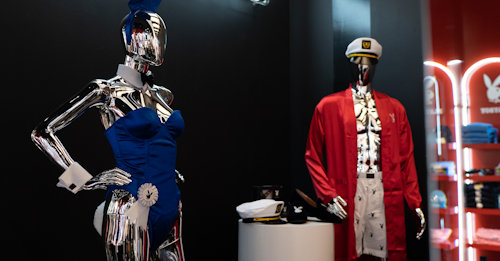 Playboy celebrated the grand opening of their new retail store at Westfield Century City in Los Angeles. The 2,300+ square foot pop-up store features apparel and accessories for all genders, including popular hoodies, streetwear, and the iconic Playboy Bunny suits, just in time for Halloween!

In the 1960s, the Playboy Bunny costume became the first service uniform to be registered with the United States Patent and Trademark Office (USPTO) and has become one of the most recognized costumes in the world and is now housed at The Costume Institute at the Metropolitan Museum of Art. The original costumes were introduced at The Playboy Club in 1960, and designed by commissioned artists, including Black American fashion designer, Zelda Wynn Valdes. Additional Playboy Bunny costumes are held by other art institutes in the country, including the Smithsonian’s National Museum of American History.

The pop-up will be open now through February 2023.