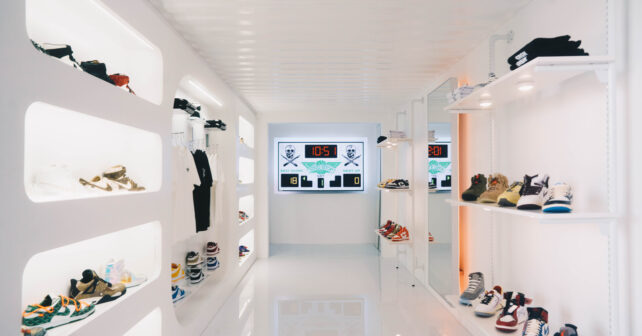 Dominic “The Shoe Surgeon” Ciambrone, recently opened SRGN Studios, a studio based in downtown Los Angeles created to inspire and elevate the craft of shoe customization. SRGN Studios kicked off their opening with a launch party on April 30 at their studio in Downtown Los Angeles. The event included whiskey cocktails from Glenmorangie, food trucks, Wingstop activations, tattoo and tooth gem artists, handcrafted floral arrangements, a friendly basketball competition and live performances by 2Chainz and G-Eazy.

The space includes countless creative aspects such as Gucci wallpaper, a luxurious bar, a basketball court and an upstairs lounge. You can also find a shoe production space and customization workshop as well as The Shoe Surgeon’s classic skeleton logo incorporated into the studio’s design.

Dominic Ciambrone and the SRGN team have had many high-profile collaborations. He gifted 15 Nike sneakers decked out in 24 karat gold and diamonds to LeBron. Celebrities such as Justin Bieber, DJ Khaled, Will.I.Am, and Drake are avid fans and customers of The Shoe Surgeon. He has been honing his craft for 18 years and is determined to inspire others. He started teaching classes on how to make hand-custom kicks in New York and will soon launch the Sign Academy in Los Angeles.

In celebration of the unveiling of the studio, partygoers gathered together for an epic event. Glemorangie took over the bar area and served craft whisky cocktails with fun names such as “The SRGN,” “The LA-X” and “X & Ginger” Attendees satisfied their hunger with the taco truck and the WingStop truck on site.

As a teaser to WingStop’s new collaboration with SRGN Studios, WingStop also had a photo booth activation and a t-shirt screen printing station. The collaboration, “The Lemon Pepper Jordan 1”, is an ode to Wingstop’s famous flavor. WingStop also hosted a competitive 3-point & dunk contest on the basketball court.

Renowned tattoo artist GANGA offered tattoos to guests throughout the day while a tooth gem artists added bling to guests’ smiles. FlowerShop, G-Eazy’s cannabis company, had a vintage inspired flower truck where guests were given a handmade floral arrangement. They also had a table where guests could take home a pre-roll with their bouquet and a Ferris wheel for attendees to ride. The event ended with a live performance by 2Chainz and G-Eazy.

By Thy Nguyen, STYLE & SOCIETY