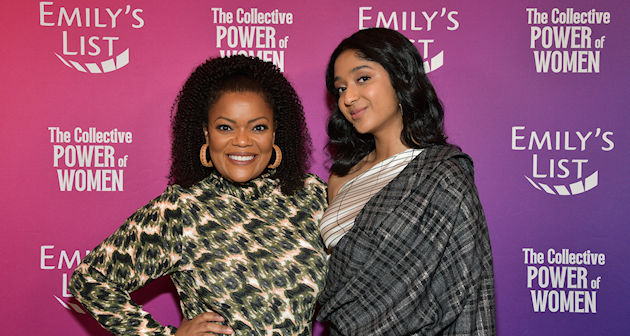 EMILY’s List, the nation’s largest resource for women in politics, presented its fifth annual Oscars Week Discussion titled, The Collective Power of Women, ahead of the 94th Academy Awards in Los Angeles. The event and panel highlighted the successes achieved when women in politics and entertainment work together and lift each other up to create a better environment for all women to change policy, boost representation, fight for gender pay equity, and ensure unions are prioritized.

Emily Cain, executive director of EMILY’s List, opened the event by welcoming guests and introducing a one-on-one conversation between author, actor and member of EMILY’s List Creative Council Amber Tamblyn and WNBA star, ESPN host and activist Chiney Ogwumike. She spoke about her career in the WNBA and the importance of women using their power and sisterhood to advocate for each other. During the conversation, Laphonza Butler, president of EMILY’s List, noted that the room demonstrated what can be accomplished when women organize and the commitment to inspire other players.

The one-on-one conversation was followed by a panel featuring moderated by host and member of EMILY’s Board of Directors Yvette Nicole Brown. Panelists included groundbreaking women who are leading the way in their fields including showrunner, producer, writer, director, and actor Gloria Calderón Kellett; actor Maitreyi Ramakrishnan; Hall of Fame marketing executive, author, and entrepreneur Bozoma Saint John; comedian, writer, actor, and producer Robin Thede; and U.S. Rep. Karen Bass (CA-37), an EMILY’s List-endorsed candidate for Los Angeles mayor. The powerful mix of entertainment industry and elected leaders all disussed the collective power of women in their respective fields.

EMILY’s List’s vision is to be a driving force of progressive change in America. With a grassroots community of over five million members, EMILY’s List helps Democratic women win competitive campaigns by recruiting and training candidates, supporting and helping build strong campaigns, researching the issues that impact women and families, and turning out women voters and voters of color to the polls. By electing more Democratic pro-choice women to national, state and local office, EMILY’s List will consistently infuse government with leaders who will drive change.