The 2020 ESPYS Celebrates Hope, Courage and Generosity in Sports 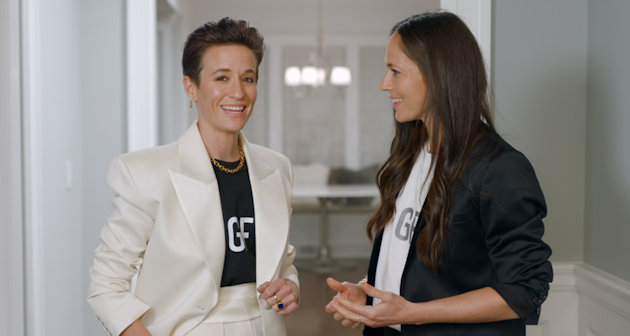 The 2020 ESPYS highlighted narratives of service, perseverance, and courage from within the world of sports. The show opened with a powerful tribute to the Black Lives Matter movement and a call to end systemic racism from hosts Russell Wilson, Sue Bird and Megan Rapinoe and Russell Wilson.

The 2020 ESPYS Celebrates Hope, Courage and Generosity in Sports

In place of awarding the best athletic achievements in sports from many shortened seasons, the show played highlights of the greatest moments from male and female performers from the year, and emphasized instead how members of the sports world pivoted to help with the battle against the Covid-19 global pandemic and cope with the challenges of quarantine. Some of those moments included José Andrés helping turn the Washington Nationals’ baseball stadium into a community kitchen to serve 12,000 meals a day to those affected by the pandemic; a tribute, led by Tom Brady and Robin Roberts, to high school and college senior athletes, who did not get to enjoy their final years in school (or final years playing for their schools’ teams).

Additionally, the show featured a tribute to the late Kobe Bryant, a love letter from the people of Los Angeles, highlighting the many murals painted around the city honoring the beloved player and his daughter Gianna, who both died tragically earlier this year.

The tribute featured the performance of an original song by Snoop Dogg.

Each year, The ESPYS recognizes individuals in the world of sports who have demonstrated admirable perseverance, courage and strength in the face of adversity with three marquee awards: the Jimmy V Award for Perseverance, the Arthur Ashe Award for Courage and the Pat Tillman Award for Service. Halle Berry narrated the presentation of the Pat Tillman Award for Service to Kim Clavel, a nurse who left her profession to pursue a career in boxing, but returned as the Covid-19 pandemic spread across North America.

Later in the show, Sterling K. Brown narrated the presentation of the Jimmy V Award for Perseverance, which was presented to Mesabi Range College running back Taquarius Wair, who was severely injured in a house fire and given just a 20% chance to live, but persevered after a month in a coma and countless surgeries.

Taquarius was told about the award by his personal hero Shaquem Griffin.

Matthew McConaughey introduced the presentation of the Arthur Ashe Award for Courage to Cleveland Cavaliers star Kevin Love, who received the award for his dedication to challenging stifling norms about mental health and masculinity, especially in the world of sports.