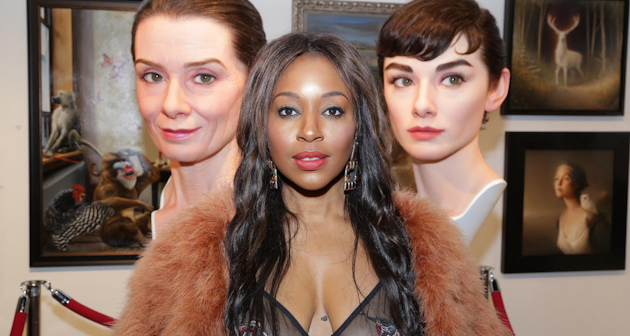 Guests were treated to a sneak peak of this year’s programming, which featured over 130 galleries, museums and cultural institutions from 23 countries. Highlights included Kazu Hiro, who won an Oscar for his special effects makeup work on “Bombshell,” who unveiled two new ICONOCLASTS sculptures of Audrey Hepburn at this year’s fair. His photorealistic recreations of Abraham Lincoln, Salvador Dali, Frida Kahlo, and Jimi Hendrix drew admirers before they even entered the show.

LA Art Show launched a new fashion section this year, featuring a retrospective of Sue Wong and her legendary gowns, many of which have been worn on the red carpet for the Academy Awards and Golden Globes. Also new this year was the European Pavilion gallery section, featuring over a dozen galleries from Spain, Italy, the UK and beyond, in celebration of the profound influence that European art has had on the world.

A portion of proceeds from ticket sales went to benefit the lifesaving mission of St. Jude Children’s Research Hospital. The LA Art Show, recognized as the most comprehensive international contemporary art fair in America, will return to the Los Angeles Convention Center February 10 – 14, 2021, coinciding with Frieze LA.