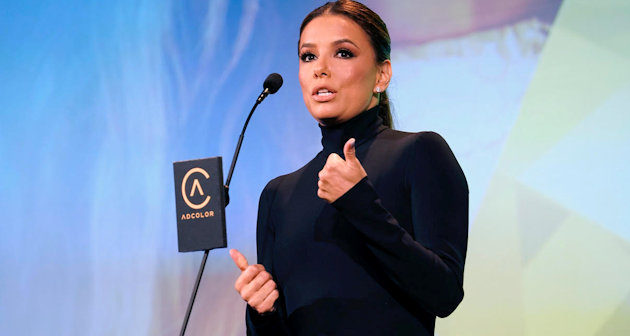 The 13th annual ADCOLOR Awards ceremony was held on September 8 at the JW Marriott LA Live in downtown Los Angeles. The annual event recognized exceptional leaders and celebrates those working to champion diversity and inclusion across the advertising, marketing, PR, media and entertainment industries. The awards gala honored Eva Longoria with the 2019 Beacon Award presented by ADWEEK, an award given to talent who uses their celebrity as a catalyst to change the status quo in the quest for diversity and inclusion.

Other honorees included The Curly Girl Collective; Emil Wilbekin, Chief Content Officer at Afropunk; Ted Chung, Founder at Cashmere Agency; Robert Wong, Vice President, Google; and others who were carefully selected from a large population of diverse influencers across the creative industries. The finalists were chosen by the individual’s representation of ADCOLOR’s motto, “Rise Up and Reach Back” and ways they took a stand in line with this year’s conference and awards theme.

The Ad of the Year award went to Wieden + Kennedy for their Nike “Dream Crazy” campaign starring Colin Kaepernick. This award is given to those that pushes boundaries, promotes conversation and highlights the lives of multicultural, LGBT or other under-represented Americans in the mass media. The Most Valuable Partnership Award went to Google and UN Women for their “Courage To Question” campaign. This award is given to companies that work together to provide exceptional and highly effective diversity solutions within their organizations and industries.

Prior to the awards, the 2019 ADCOLOR Conference kicked off with an intimate conversation between acclaimed filmmaker and philanthropist M. Night Shyamalan and ADCOLOR President and Founder Tiffany R. Warren.  The two discussed the importance of incorporating unique voices in storytelling, both in front of, and behind, the camera. Shyamalan spoke passionately about his upbringing, and how that has impacted the decisions he’s made throughout his career.

The kickoff was followed by over 17 sessions on five stages, packed with thoughtful and inspirational panels from leading advertising, business executives, and personalities, who are changing the way brands, media and entertainment. Key panel topics included: Defining an Identity Beyond Black & White, Defending the Diaspora, Expansive Gender Identities in Media and Culture, The State of Women of Color in the Workplace, Ending the Cycle of Disability Bias and Voices Creating Change in the LATAM Community where singer Becky G served as a panelist.