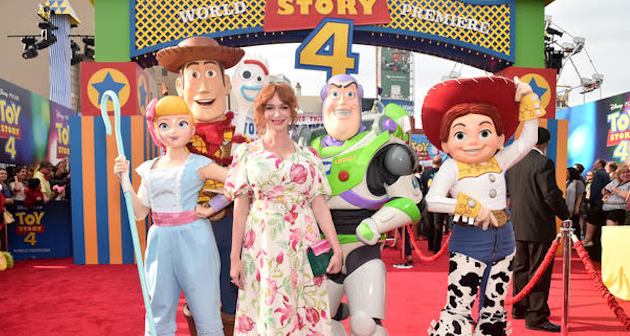 The El Capitan Theater came alive on June 11 as the stars and toys of Disney and Pixar’s Toy Story 4 rolled in for the film’s premiere in Hollywood. Buzz Lightyear, Woody and all of our classic childhood toys are still showing the world what it means to have a friend in each other nearly 25 years later as “Toy Story 4” continues to follow the adventures of the characters as they embark on a road trip and find themselves on an unpredictable journey.

Director Josh Cooley, alongside producers Mark Nielsen, Jonas Rivera and writers Andrew Stanton and Stephany Folsom bring back the toys we all grew up with and loved, adding twists and new adventures to a timeless classic. Randy Newman continues composing scores that tug at our heartstrings and bring out our inner child. Newman features Chris Stapleton as the voice behind the movie’s hit song “The Ballad of the Lonesome Cowboy”.

The film stars Tom Hanks, Tim Allen, Annie Potts, Tony Hale, Keegan-Michael Key, Madeline McGraw, Christina Hendricks, Keanu Reeves, and more. The world premiere was celebrated as the El Capitan Theater was transformed into a carnival where guests and stars of the film were able to experience merriment as well as meet the toys from the film. YouTube Stars Lucy and Lydia Connell stole the show with their whimsical gowns while Patrick Starr killed it in her decked out sequin dress. Other celebrities in attendance included Jillian Michaels, Tiffani Thiessen and Carly Hughes. Characters Buzz Lightyear, Jessie, Bo Peep, Woody and Forky also surprised guests on the red carpet.

By Thy Nguyen, STYLE & SOCIETY