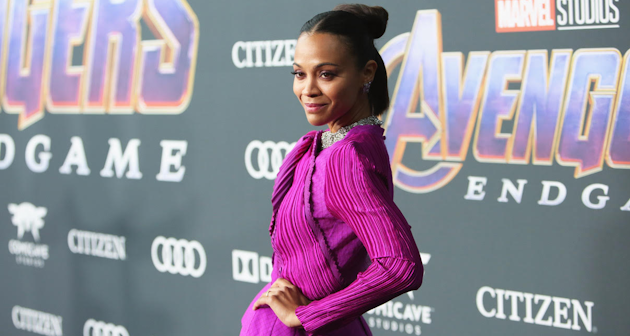 Marvel stars, fans, and everyone alike could hardly breathe in anticipation for the world premiere of Avengers: Endgame. The film has been hailed the studio’s most-anticipated movie of all time not only because of its sheer magnitude in concept and storyline, but because of its drawing grand conclusion of the twenty-two films. The film follows the grave course of events set in motion by Thanos, that wiped out half the universe and fractured the Avengers ranks. Compelled to restore the universe back to the way it was, it is up to the remaining Avengers to take one final stand against their enemy to save all the lives that were lost.

Almost as impressive as the movie itself was the lineup of superheroes who lit up the purple carpet at the world premiere in Los Angeles. They included Avengers stars Robert Downey Jr., Chris Evans, Scarlett Johansson, Zoe Saldana, Evangeline Lilly, Chris Hemsworth, and Brie Larson who gave a nod to Thanos with her red carpet look by wearing infinity stones-inspired jewelry.

The film made history it’s opening weekend with a record-shattering estimated global debut of $1,209.0 million, becoming the first film in history to surpass $1 billion in its opening weekend. It reached the billion-dollar threshold in the first five days, more than twice as fast as its predecessor “Avengers: Infinity War.” Marvel Studios now holds the top two global openings of all time (“Avengers: Endgame” and “Avengers: Infinity War”), as well as six of the top 10 domestic debuts and two of the top three international.