Soul of a Nation Art Exhibit Opens at The Broad Museum 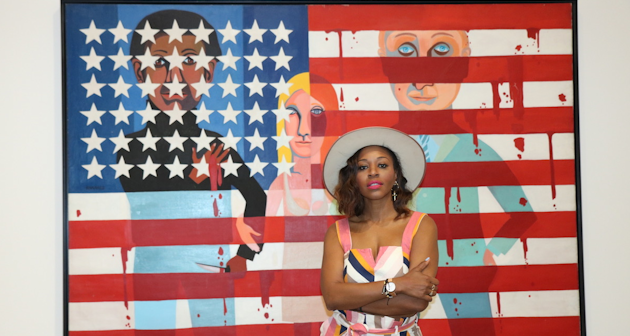 Soul of a Nation: Art in the Age of Black Power 1963-1983, has made its west coast debut at The Broad Museum in Los Angeles! The internationally acclaimed art exhibition celebrates the work of more than 60 Black artists made over two revolutionary decades in American history, beginning in 1963. The must-see exhibit includes vibrant paintings, powerful sculptures, street photography, murals and more.

Soul of a Nation examines the influences, from the civil rights and Black Power movements to Minimalism and developments in abstraction, on artists such as Romare Bearden, Barkley Hendricks, Noah Purifoy, Martin Puryear, Faith Ringgold, Betye Saar, Alma Thomas, Charles White and William T. Williams. Los Angeles-based artists also appear throughout Soul of a Nation, foregrounding the significant role of Los Angeles in the art and history of the civil rights movement and the subsequent activist era, and the critical influence and sustained originality of the city’s artists, many of whom have lacked wider recognition.

Music has always been a driving vehicle of change in the struggle for equality since the early civil rights and Black Power movements of the ‘60s and ‘70’s. It provided inspiration to the visual artists in Soul of a Nation: Art in the Age of Black Power 1963 – 1983. In honor of the Soul of a Nation exhibition, legendary producer, musician and composer Quincy Jones curated an exclusive playlist on Apple Music intended to accompany a walk through the exhibition, highlighting the music that gave voice to the passion, anger and hope behind the push for a new America. Songs include James Brown’s ‘Say It Loud, I’m Black and I’m Proud’, Gil Scott-Heron’s ‘The Revolution Will Not be Television’ and many more.

Running now through September 1, tickets can be purchased in advance here, with same-day standby tickets available for purchase onsite each day. The Broad is also offering free admission to Soul of a Nation every Thursday from 5-8 p.m. (last entry at 7 p.m.) during the exhibition’s run.