Citizen Rose Peeks into the Life of Activist Rose McGowan 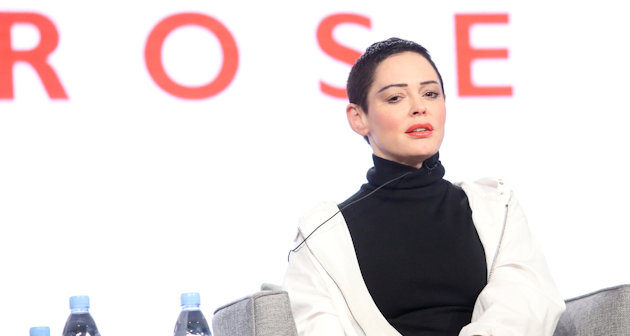 “My name is Rose Arianna McGowan,” says actress-turned-activist Rose McGowan in the opening lines of her five-part documentary, “Citizen Rose,” produced by E!, which kicked off with a two-hour pilot on Jan. 30. “Do I make you uncomfortable? Good. You don’t know me, but who do you know? The one that was sold to you?” She stares wide-eyed into the camera. Her voice narrates a montage of clips—of a young, fresh-faced McGowan posing for photographs on the red carpet, and another of her famously arriving at the 1998 MTV Video Awards in a midi-length see-through gown. In other words, moments that highlight the actress’ rise to fame following several roles, most notably her appearance in supernatural drama series “Charmed.”

“The one you read about?” The voice-over continues, followed by a smattering of headlines and footage of several news outlets reporting on McGowan’s allegations of rape against film executive Harvey Weinstein. In the wake of the #MeToo movement, and over the past few years, McGowan has emerged as one of the country’s strongest voices calling for a national conversation about sexual harassment. She has garnered a throng of supporters on social media under her own hashtag, #RoseArmy. But McGowan is quick to point out that #RoseArmy is not about her name, and it never was. “It is about all of us being roses in our own life,” she addresses the crowd in a speech she delivered at the Women’s Convention in Detroit in 2017, a segment of which is featured in the documentary. “Not me. The actual flower — because we have thorns, and our thorns carry justice, and our thorns carry consequence.”

Throughout the film, she speaks candidly to the camera, often while sitting fully clothed in her bathtub, about the event that dramatically altered 20 years of her life and on withstanding the pervasive force of the aftermath. She deliberately avoids uttering Weinstein’s name, often referring to him as “the monster.” She speaks of the private investigators—including an Israeli operative masquerading as a women’s-rights advocate—he hired to secretly harvest information and record private exchanges with McGowan.

Audiences even listen in on a conversation between McGowan and Ronan Farrow, a journalist who wrote an in-depth feature titled, “Harvey Weinstein’s Army of Spies,” published in November of 2017 in The New Yorker. “Your claims fact-checked out,” says Farrow. “I saw that very early in the reporting process, and so when people would say, you know, ‘This can’t be. You’re saying there’s been this conspiracy of silence for 20 years.’ I would say, ‘Here’s the specific reporting.’” The film follows Rose, over the course of three months, to an anti-domestic violence rally, to sit-down interviews with other sexual-assault victims, to the Rose Army Retreat in Colorado, among other places.

But segments interspersed during the mini-movie venture beyond the confines of the Weinstein scandal. The narrative journeys back to Rose’s childhood, particularly her years of living with a family heavily involved in the polygamous cult dubbed “Children of God,”—memories she’s been lugging around like a wheeled bag, still click-clacking behind her today. She welcomes audiences into her first home in Los Angeles, where she used to sleep on a couch after a being homeless for a year and a half, what she calls “the next logical step in [her] illogical life.” It also pulls out a chair for viewers at her Thanksgiving table and invites the cameras to sit through an emotional tête-à-tête with her mother, in the midst of tears and intensity that speaks of great sorrow and pain. These moments hold audiences inside the exploration, not only of McGowan’s fiery activism, but of her silent and not-so-silent struggle, of being scared while being “Brave,” (which happens to be the name of her memoir, released on the same day as “Citizen Rose.”)

“Rose McGowan’s courage in addressing sexual abuse and harassment in Hollywood ignited a conversation and inspired other women to speak out against their abusers,” said Amy Introcaso-Davis, Executive Vice President, Development and Production of E!, in a press release about the documentary. “We look forward to taking viewers inside this talented, dynamic woman’s world as the first allegations unfold and she becomes a leading voice in a critical cultural change.”