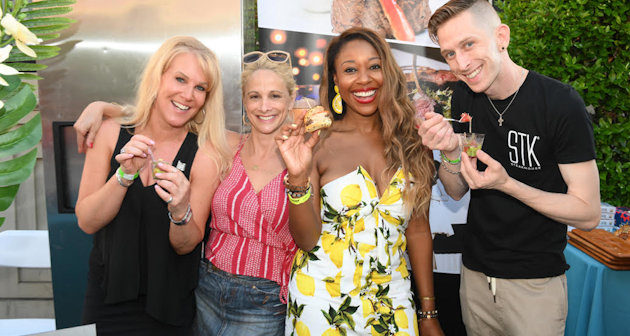 The Concern Foundation for Cancer Research hosted its 45th Annual Block Party on the backlot of Paramount Studios in Hollywood featuring multiple stages of live entertainment, casino style games, live and silent auctions, and food, desserts and beverages from over 70 of Los Angeles’ best restaurants and caterers. Themed this year as California Dreaming to Conquer Cancer, more than 4,000 guests were in attendance, raising $1.8 million for cancer research through ticket sales, donations and bids on auction items.

This year marked Concern’s 45th Annual Block Party and since its inception, Concern has raised over $68 Million Dollars in salary support to 800 gifted cancer scientists studying cancer. This year, in honor of their lifetime of contribution and efforts in support of the Concern Foundation, Judy Carroll, Lexy & John Carroll & the Carroll Family were awarded with the Lifetime of Giving Award.

Kinya’s Outfit by VICI Collection. Code KINYA20 to save 20%