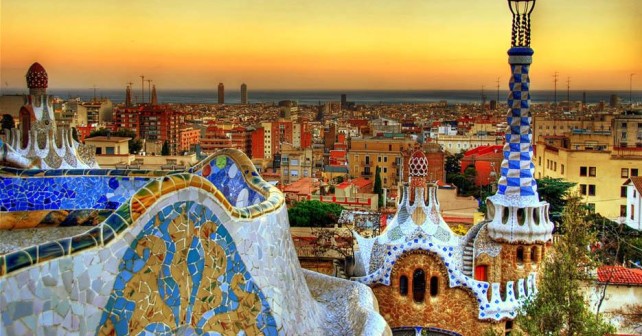 If you’re looking to visit a city diversified with cultural experience and savory cuisine, Barcelona should be at the top of your list for your next travel destination. Being its own colorful entity with its rich heritage, food and shopping, Barcelona is known as the second capital of Spain and is the capital city of Catalunya, a district of Northern Spain. Here are the six must-see spots to check out once you touch foot on Barcelona’s enchanting, charismatic soil. By Gina Velasco

For all you shoe lovers, La Manual Alpargatera (The Handmade Shoe Shop) is the place to go when it comes to buying shoes in Barcelona, specifically espadrilles. This 48-year old store is well known for its handmade espadrilles, which last longer and are more comfortable than machine-made ones. They offer a wide variety of styles and colors. A must-do on your shopping list as Barcelona is the only place you can get these handmade must-haves. In 1882, construction for La Sagrada Familia Church began and the following year, Catalan architect Antoni Gaudí took over the project. He intended for the church to have 18 spires, but as of 2010 only 8 spires have been made. Once the other 10 are completed, La Sagrada Familia will be the tallest church in the world. The interior of the church consists of 5 aisles and the exterior is made up of 3 facades. Considered a UNESCO World Heritage Site, this is a breathtaking sight to visit. Another one of Gaudí’s famous works is Modernist Park Güell, a public park composed of gardens. Eusebi Güell assigned this project to Gaudí and together they were inspired by advanced housing development and technology. A long bench, in the conformation of a sea serpent, encloses the main terrace of this World Heritage Site. The highest point of this alluring park offers an unforgettable view of Barcelona and the bay. One of the greatest sound, smell and color sensations in Europe is Barcelona’s most central produce market, the Mercat de la Boqueria (La Boqueria Market). About two thirds of the way up the Ramblas, on the left, you will see one of Europe’s largest food markets featuring a diverse colorful selection of herds, spices, vegetables, nuts, candied preserves, cheese, ham, fruits, seafood, gasping fresh fish and beady-eyed poultry. There are lively seafood restaurants and thriving street food stands, refreshing fresh juices and enticing tapas bars all around. When you think of Spanish art or art in general, one word comes to mind…Picasso! Naturally there would be a museum dedicated to his work and that’s the Picasso Museum, in which his lifelong friend and secretary, Jaume Sabartés came up with the idea, already having many of his paintings and drawings. The museum is occupied with 4,251 of Picasso’s works, bringing to light his relationship with Barcelona throughout his years. There is no shortage of cava bars in Barcelona, but Can Paixano is the one to visit for its exciting ambiance and delectable Bocadillos (sandwiches) that can be ordered with just about everything from Spanish ham to olives and salami.